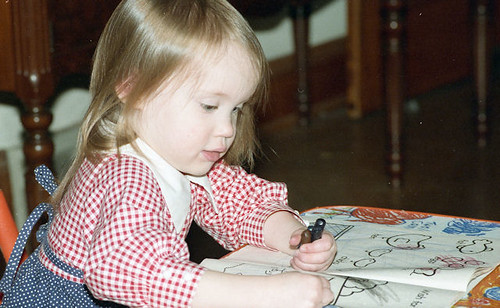 A childhood picture of me – a child with femaleness. What a tragedy.

{A note on tone before we get started. This is a very sarcastic post, intended to show some of the problems of how some people talk about autism}

There is a terrible epidemic happening across the globe! An affliction known as femaleness affects approximately 49.6% of the total world population! Many people may not know just how terrible femaleness is, which is why I am here to tell you all about it.

The statistics are clear. Being burdened with femaleness is a terrible thing that no one should have to live with. Clearly the best solution to all of these problems is to eradicate femaleness! Please donate all of your moneys to me so I can find a cure for the scourge of femaleness.

Now to take a more serious turn, I rather hope the absurdity of this post was entirely obvious. Every point in that list is true, complete with citations if you want to look them up. They are very real problems faced by women (or those who people perceive as women) in our society. However, the list conveniently ignores any condition that is less prevalent among women than men. It ignores any benefit to society we get from having women around. The overall implication was to blame and demonize gender for gender disparities, even though that is absurd. It is far better to change society when the problems are social, and to simply address the various medical cases as they are rather than try to “cure” them via getting rid of one gender. And not only is it absurd, it is horrible. It is a terrible, awful thing to blame a person’s gender – something that is intrinsic to who they are – for possible associated problems. If a woman is experiencing menstrual cramps and is doubled over in pain, it would be absolutely horrible to simply say “oh, she’s female. women just do that sometimes” and then seek to “correct” the behavior and get her to stand up straight without addressing the underlying issue of pain.

So why do people do this all the time when it comes to autism?

Filed under rant, that's not helping