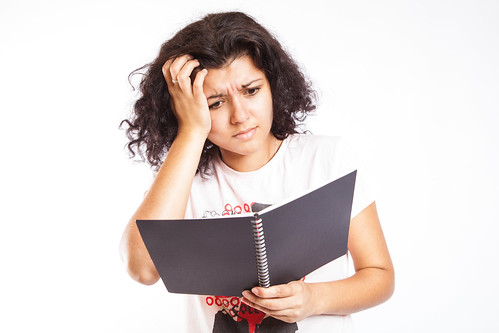 Image is of a woman with her hand up to her head, with a confused facial expression. Creative commons image by CollegeDegrees360 on flickr.

How about another “the world from Andraya’s perspective” post? Or maybe a “things that confuse me” post. Those posts have a lot of overlap.

So there are two concepts that I gather have very serious differences between them that I find I really struggle to understand. People have even explained the differences to me that made sense to me at the time, but somehow I just lost the thread of it or something.

Basically – what is the difference between privacy and secrets?

I mean, I get that there’s kind of a different tone to the two words. People seem to see privacy as a matter of respect, but “secrets” are dirty and icky and bad. But on a personal, things-in-my-life level, I don’t really know which is which. If I have a thing that I am only willing to share with a small number of people, and it is important to me that they not tell others, is that a desire for privacy or is it a secret?

In the past I figured the difference didn’t really matter and didn’t bother myself with it, but then I started running into people who took it as a matter of pride that they do not keep secrets. Not their own, and not anyone else’s. Suddenly, the difference became SUPER important to me. If they don’t keep secrets, does that mean they won’t respect my privacy? That I cannot share private things with them because they won’t keep my “secrets”? My response to those people is that I cannot get close to them, because I cannot ever share private things, because they will not respect that I do not want these things to be spread around.

But then I remember that people say that privacy and secrets are different. And I get confused. What if I say something if private, but they decide that it’s a secret and that they don’t keep secrets? How do we classify which is which? Is it just “this is icky, therefore it’s a secret; that is ok, therefore it is private”? But sometimes good things are secrets, right? Like surprise parties, or the present you are getting someone. And if someone refuses to keep any secrets, period, does that mean you can never share surprise parties with them, or tell them the present you are getting for someone else? If not, why not? Why would refusing to keep secrets be a good thing in that context?

One response to “What’s the Difference?”