What I meant/What I said 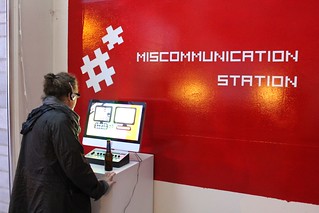 Autism is defined by being a social disorder – that is what differentiates it from other developmental delays. As such, I do a lot of thinking about social things, including how I communicate. It is normal for me to spend a great deal of time thinking about what I want to say, why I want to say it, what my motivations and intentions are, what I am hoping to gain, and any number of other things that all culminate into the words I choose. This means that sometimes, especially for things that are personal or important, it can take me a long time to find my words. Weeks or months sometimes (and for the autism spectrum, that’s pretty fast. some people can take years). I also know that I can slip and mess up my words if I am in a situation where I am being pressured to find words before I can fully do my processing.

I have learned that other people do not go through this process. They just always have words. I have also learned, sometimes very harshly, that this means that people may not always be fully aware of what’s behind their words, or even believe that there is nothing else behind the words (this is almost never actually true). Additionally, allistic people are not immune to making errors in their communication or word choices.

What can be of profound frustration for me is what happens when those errors happen.

See, I try very hard to acknowledge my mistakes and do better. Other people… well, even if they have very good intentions, they are rarely happy to say “oh whoops, my mistake. let’s try again.” And that bothers me. A lot.

Ok, let me give an absurd example that probably never happens in real life that will hopefully help illustrate what I’m talking about.

It’s what happens next that can vex me. Now, it isn’t always bad. Nee and I seem to have a script that works very well when either one of us find ourselves accidentally using words that say something we don’t mean. So we would end the conversation something like this:

I think this has spoiled me, because I keep running into people who don’t work that way. Instead, the rest of the conversation goes something like this:

P1: I DID NOT JUST TALK ABOUT BAKED POTATOES! YOU ARE MAKING ASSUMPTIONS ABOUT WHAT I’M SAYING!
P2: Bwah?

It all tends to go downhill from there. And yes, some people really have gotten incredibly vitriolic on me about this sort of thing. From my perspective, now they are lying. I am willing to believe that they meant something other than what their words actually said, but if they insist that their words were correct and I’m just being awful then I cannot move forward. I mean, I guess it’s true that I made an assumption about their words – I assumed they meant what they said. As assumptions go, it’s one I am very comfortable with.

After my post on feeling broken people exhorted me to see strengths in my autism. And I do try to – I am very good with details, I can be extremely determined, I see the world in ways other people do not – but it can be challenging when most of the world seems to want to focus on, and constantly remind me of, my deficiencies. This is an area where it kind of seems to be both a strength and a weakness. I put much more effort than most people do on finding and looking at words. I do this because it is a necessity for me, but it also puts me in a position where it is habitual for me to inspect word choices, which can be helpful. Sadly, it means that when there is a disconnect between what is said and what is meant, I seem to stall. And the rest of the world does not seem interested in finding a way to clear it up. I am expected to simply ignore the words used in favor of what was “meant” (except, of course, when I am not to do that and I get yelled at and called rude for trying to fully understand what is behind a person’s words. I just cannot win).

I wish it was normal for people to inspect their words. I wish people didn’t take it as some kind of attack if I point out what was actually said. I wish people could just say “whoops, I made a word error. I actually meant this thing.” When I make a word error and acknowledge it and try to find better words, I wish people were more willing to accept that I meant something other than what I said. Sadly, none of that seems to happen with people other than Nee, and it can be frustrating for me.

Hey world! You need to be better!

I was thinking a bit where that might come from, and what’s involved in that. Ok, in that post I had said:

“mistaking what other people think of you for who you are”

Ok, so that’s a thing. Who you are and what other people say you are can, in all reality, be difficult to separate. When everyone around you says you’re a duck, it makes sense to take a look at yourself to see if maybe you are, in fact, a duck.

And I think many NTs don’t really question this all that hard. But I also think that NTs don’t actually run into a huge number of instances where large numbers of people around them insist that they are something that they are not. Off the top of my head I can see it for trans* issues, which certainly is a big deal, but that’s about it.

But when you are autistic, you have to do this all the time. For everything. With everyone. Because people will judge based on what they can see, and if they can’t see something in a way they can recognize, they will declare it not there.

So the non-verbal child who cannot communicate in a method that most people can recognize is declared to have a low IQ, to not know their own name, to not be self aware, to not be aware of their surroundings. We don’t know what’s going on in that child’s head, the thoughts that might be in there but not coming out in a way we can easily recognize. Can you imagine BEING that child? Everyone around you says that you don’t know who you are, that you can’t add or count or think or feel. That you don’t know what anyone is saying, because you don’t talk or respond to words the way they think you should. EVERYONE says this. Everyone believes it. Even the people who are supposedly on your side, supporting you.

And then there’s you. All alone. Bombarded with messages of who and what you are that are quite possibly entirely incorrect. How do you maintain your sense of self? How do you keep that from destroying you?

Well hopefully, you learn to disconnect what other people think of you from who and what you actually are. You forge a sense of self that is separate and distinct from the thoughts and beliefs of other people.

Because you have to, if you want to actually have you own identity and eventually grow into an adult who *can* show things in ways people can see.

So yeah. I think we need to keep social awareness separate from self awareness. But I also think we need to get better at realizing that things aren’t always what they seem, that just because we can’t easily see something that doesn’t mean it isn’t there.

Because when we don’t do that, we can do some serious damage.